Okay, I could complain about the fact that I am re-doing the binding on a small quilt. The reason is that I didn’t clean and check the stash really well before heading out to the quilt store. And since the quilt is all hand dyeds, trying to find a batik that was similar in value was impossible. So the color I picked looked okay in the store against the quilt but I didn’t like it after I had almost completely sewn on the binding. But I did a little bit more cleaning and managed to find more of the hand dyed that I had used tucked away in a basket. So I frogged the binding and am almost finished sewing on the second binding. I like ever so much better this time. 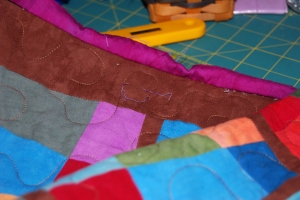 It is too hot to do anything outside that is unless you are a farmer or a bee. The local farmers are late in cutting their hay this year because the spring was so wet. There is a large field nearby where they have been cutting hay for the past few days. Every time I want to stop and take some photos of it, the wind is blowing right towards where I would have to stand. And well, I think you will understand why I haven’t stopped when you see the photos. Of course the location I chose to stop at last night was a dangerous place for reasons other than the dust. Some one kept threatening to hit me with a golf ball. Of course he was also yelling at me to take this shot and that shot. But don’t worry, it was some one I know really well. I threatened to throw some rocks at him and not give him any more desserts. (Not that I would stop that. He is my taste tester along with his grand daughters.) Plus I promised his wife that I would harrass him as much as possible. Of course nothing was said about not posting him hitting balls on the internet…….

Okay, the photo didn’t want to load. BUt I have it to use later. This weekend will really hot so I will be staying indoors. I hope everyone in the DC area manages to stay cool.