Ring Around the Rosy

Strange title, I know but it has to do with something I was reading in a book last night. I managed to finish yet another cowl last night. I was making one for P out of some Malabrigo in Stone Chat. She wanted it to be at least 10 inches long and I managed to make it 12 inches before I decided to bind it off. I need to wash it before mailing it to her. She will block it out to lengthen it if needed. The pattern for her cowl was the traditional feather and fan lace pattern. And yes, I have started another cowl. This time it is the Seaweed Cowl in yet another color of Malabrigo that is in the stash. I am fast running though my Malabrigo stash though since it was very tiny to start with. But I love the feel of the yarn.

I have been reading Mistress of the Vatican: The True Story of Olimpia Maidalchine: The Secret Female Pope by Eleanor Herman for the past several weeks. I have read the previous books by this author so I did not hesitate to spend the money on a hard back book. If Olimpia Maidalchine was born today she would be a woman to be admired. But she was born in a time when women not allowed to do anything without the approval of the males in their family. She found a way to work the system in her favor. Actually, I think there may be one or two female politicians who may have taken lessons from her. Even today, this woman would have been called a few unfavorable names. From the facts available to us, she came from a relatively poor background and rose to power. She was the force behind her brother-in-law becoming Pope Innocent X and in the manner of the time, she became an extremely wealthy woman through marriages, bribes, theft, crop speculation, shrewd business deals, and plain old greed. Wait, she sounds like some of the people in power now. And yet despite all of her riches and family connections through marriages, she died alone. During her lifetime, and through the centuries, the bubonic plague aka the Black Death killed many. It struck every one equally. The nursery rhyme Ring Around the Rosy has been said to have come from medieval times although there are many folklorists who say otherwise. I am need to hit the bookshelves tonight in search of another book that will keep me going for a week or two.

She stopped moving long enough to capture her

And there has been quilting going on. I have a quilt that I need to go out and purchase some binding fabric for this weekend. I have been slowly working my way through the huge pile of UFO quilts. And the fabric used in this quilt was a special one but I do not have enough left over to bind the quilt. I think this one will look perfect in a friend’s lounge so I want to finish it and mail it to her before the cooler weather truly hits. I know she reads the blog so I don’t want to say who. But P, it is not you. Your quilts are almost ready.

This one needs binding still 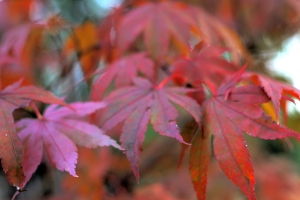 The Japanese maples are showing their fall color

5 responses to “Ring Around the Rosy”