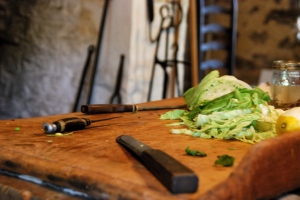 From the kitchen last Sunday at the museum.

Orange is the color of the day around here in the garden. The tiger lilies are blooming and orange seems to be the most common color for them. 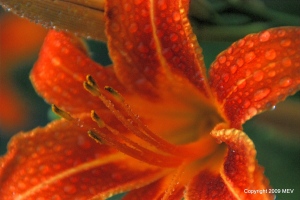 Comments Off on Orange

I have been a bad blogger. I didn’t blog at all last week. I mean I didn’t even post a photo! But I have actually been knitting which was proved by the fact that I gave away two hats and a pair of fingerless mitts to some of the reenactors that I know this past weekend. And of course, I forgot to take photos of the knitted items before giving them away. I also have realized that I have not spun in almost two week either. I keep getting dirty looks from the three spinning currently sitting in my living room. 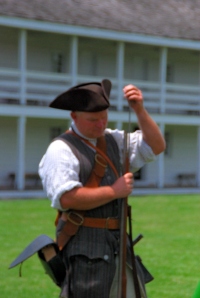 And yes, there are three spinning wheels in my living room. I have one on loan thanks to the wonderful Lauren. Lendrums are actually lovely and I have fallen under the spell of the Cult of Lendrum now. I also have a Louet S15 sitting in my living room which I just purchased from another friend. And of course, my Matchless is in the center of the line up. 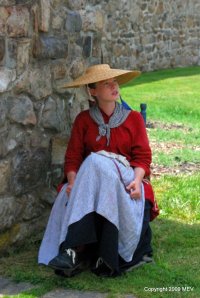 So what have I been doing? I have been spending time working on finishing up some quilts and learning about open hearth cooking. I spent this past week working as a docent at Schifferstadt in the kitchen both days. I was dressed in modern clothing but we were able to show that women’s work really hasn’t changed that much. And the fun part was that both days, we had the interns aka das kinder working in the kitchen. Water had to be fetched from the “well” (the hose outside), dishes washed, and the fire tended too. And we also made them help with the cooking too since after the museum closes we all get to eat. So they were told that if they wanted to eat dinner they had to help. Funny how mentioning to teenage boys the magic word of food means they are willing to help out in the kitchen works. One of the boys was actually able to complete a merit badge for Scouts by making dessert on Saturday. There are plenty of photos from this past weekend but I haven’t even downloaded them yet. 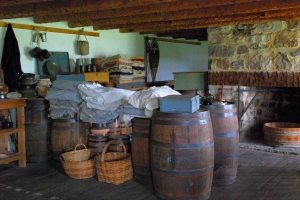 I have also starting making trips up to Fort Frederick to get familiar with it and the history of the Fort.

Still playing with the new techniques that I learned from Jacey this past weekend. I still need to process more of the photos from the class but in the meantime enjoy this shot that was taken when Jacey explained to us how she creates felted beads. 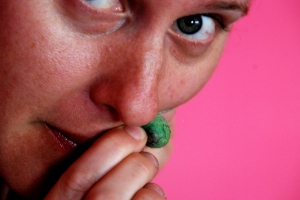 Okay she doesn’t really create them this way but it is a fun shot.

Sorry, my internet connection has been flaky the past few days. The correct answer is re-enacting. But it is not SCA. This area of Maryland was the frontier during the French–Indian War. One of the houses that was standing at the time of this was still stands in Frederick. It is now an architectural museum showcasing how houses were built. I was there this past weekend during Colonial Days. I was on my way to my LYS when I passed by and decided to stop. I never made it to the LYS. I ended up spending both Saturday and Sunday there. 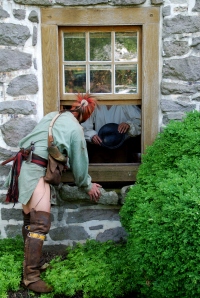 I have thought about doing re-enacting before but I had never really felt like I had found the right period of history. SCA was not for me. And the other museum in town focuses more on plantation life which I do like but I do not want to wear a corset if at all possible. One of the people I was speaking with on Saturday was the director of the museum. He told me that while he is all for accuracy in costuming, he still wants people to be involved. So for women, corsets are optional. That is what sold me. Plus the people I met helped to sell the deal. I am all signed up to be a volunteer at the museum for demonstrating the needle arts including spinning, knitting, embroidery, hand sewing and other forms of the needle arts. Plus I may also be asked to take photos at events. 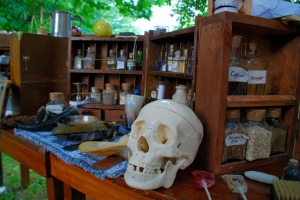 Two of the people that I met also participate in events up at Fort Frederick. I may have also agreed to help with some documentation of a restoration that is being done up there by the Friends of Fort Frederick. 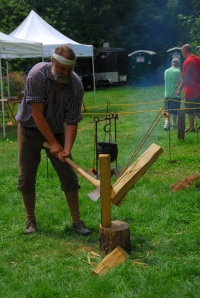 I have found a pattern to make my clothing that is time appropriate thanks to P. Actually she found me two patterns that I have ordered. I will make the simple set of clothing first since it requires very little in the way of fitting. The first event I have coming up is June 20th. I am not going to push myself to get the outfit done by than since I can still being dong something even in modern clothing. (My camera will be in use at the least.) 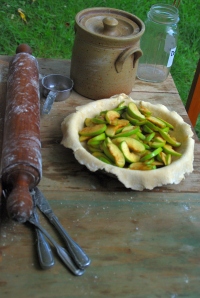 Regardless of the century, apple pie is a winner

I have already made some new friends in the past week who are involved with historical preservation. Michele was the woman who was cooking in the clue from Tuesday. Michele and her partner, Doug, were very welcoming to me and answered my questions and freely shared their knowledge. I am looking forward to working with Michele and learning more about open hearth cooking from her. (I am also looking for old recipes that would be historically accurate as well.)

And there is knitting happened but I need to wait until the rains go away to photograph it. (And no, the eye candy had nothing to do with my deciding to finally making the leap. Although it didn’t hurt.)

Here is clue number 2 to the new hobby. 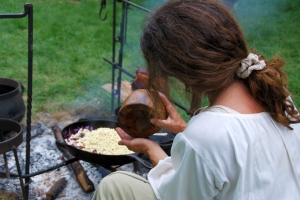 Comments Off on Clue #2

It looks like I may have a new hobby. I live in an area that is full of history and my new hobby has something to do with my passion for history and textiles. Instead of saying what it is, I am going t post some photos and see if anyone can figure out what I am going to be doing now. And P, you are not allowed a guess since you already now.

Tales and truths about our cabin in the Alaskan Interior.

Gardening, Cooking, and Putting Down Roots in America

life on a croft in Ness